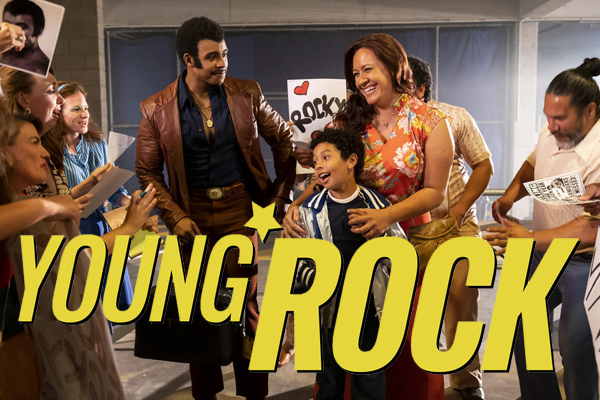 Finally! The Rock has come back to… Television!

This time he isn’t looking to dominate a Rattlesnake or take down the National Football League, The Rock is running for President. Yes, you heard me right, The Rock is headed to the White House.

At least, that is what the premise of his brand new show, Young Rock is all about. However, before The Rock gets to the White House, he has tell the world about exactly who he is. The beginning of the series kicks off with The Rock being interviewed about running for President of the United States and along the way, he attempts to give the backstory of who he is, The Good, The Bad and The Ugly.

The way this series seems to be shaping up, we will be getting a look at how The Rock came to be, as we get a look at his life growing up, in many different forms. We get to see The Rock or “Dewey” as he is known when he is younger, on the road with his family, as his father Rocky Johnson travels the road of professional wrestling. We get to see Dewey interact with some of his father’s friends and family, including the likes of The Iron Shiek and even Andre The Giant.

Word of advice, never say the F Word around Andre, he will just pick you right up in the air and make sure you never use the F Word. For the record, the F Word is the word Fake.

One of the key themes of the show is about the other F Word, Family. Throughout the show you see the relationship he has with his father as he grows up, whether he is as a younger kid and trying to just be like his father, growing up without his father being around much when he is a teenager or when he is making his way through college when he heads to the University of Miami. The other relationship that you see is the one that he has with his Mother. You also get to see the struggle his mother had to deal with to make ends meet.

One of the subjects that gets talked about in the first episode and I assume will be one of the themes throughout the series, which just so happens to be the title of the first episode, which is, “Working The Gimmick”. What that phrase seems to mean is creating the person you want to be. For the teenage version of The Rock, he wants to be seen as someone who is rich, so that the ladies will like him, which means he will do whatever he has to do, to become the person he wants to be, which in some cases, despite what his PR manager says, he tells stories of how as a kid he shoplifted to get clothes that were more expensive than the ones he currently had. This included better shirts, pants and even jackets, just to show the type of person he wishes to be.

My overall take on this show after the first episode, the show felt like it was jumping all over the place, which I suppose for the pilot episode, you would expect it to happen. As the idea of the pilot was to introduce all of the incarnations of The Rock we would be seeing in the series. My hope for the rest of the series, is that there is a lot less jumping between personas and focus on individual stories of each version of The Rock, instead of jumping between them all in one episode.

If you are a fan of The Rock, which I am clearly, or a fan of pro wrestling, you will understand a bunch of the wrestling terms used in the show. I can see how as someone who doesn’t have an understanding of the insider terms, you would feel a little lost on some of the comments made. Hopefully, they do a better job at explaining some of them as the series going forward.

I’m looking forward to seeing how the rest of this season plays out, as I have high hopes for it to be very entertaining. If you are a fan of The Rock or even a pro wrestling fan, give it a look, check it out or if you are someone who likes to binge watch a show, wait a few weeks and let some of the episodes build up and give a look, you won’t be disappointed.