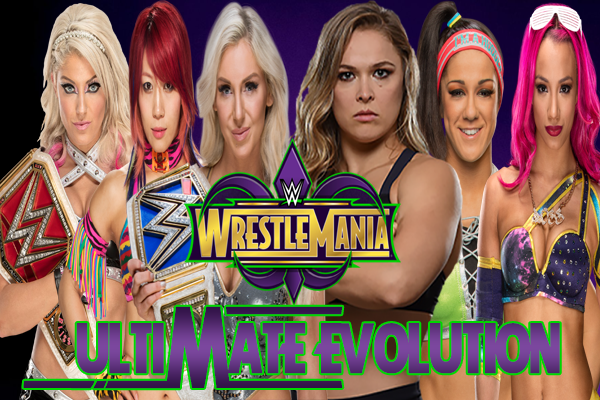 The stage has been set for World Wrestling Entertainment, to create the Ultimate Evolution.

The cards were laid out on the table at the 2018 Royal Rumble with the debut of Former UFC Star “Rowdy” Ronda Rousey making her much anticipated debut with WWE as a surprise following the first ever Women’s Royal Rumble Match, in which she walked to the ring, stare down her now rival foes and pointed like all WWE Superstars do, right at the Wrestlemania sign, telling the world she will be on the Grandest Stage of them All. The question that needs to be answered, who does Ronda Rousey face when she makes her in-ring debut for WWE. The Answer is one word.

There is no other opponent for Ronda to make her One on One in-ring debut against, than the daughter of one of the Greatest Wrestlers of All-Time, “Nature Boy” Ric Flair. You look up and down the roster and you see potential great match-ups for Ronda Rousey, but on the stage as big as Wrestlemania, Charlotte should be the one given the honor of facing Ronda Rousey and yes, I did say Honor.

You look at all of the things that Ronda Rousey has accomplished in her career, between competing in the 2008 Olympics, creating an Undefeated Streak in Mixed Martial Arts that captivated the sports world, which allowed her to Main Event UFC Events, something that had never been done before and she has also broken in to Hollywood, allowing her to not only become a huge sports star, but an overall Hollywood Celebrity, recognized all over the world. All of these accomplishments combined with all of the accomplishments that Charlotte has created in her WWE Career, which include being an NXT Womens Champion, the Last WWE Divas Champion, the first-ever WWE Womens Champion and also being both a Smackdown Womens Champion and a Four-Time RAW Womens Champion, matching those two up is the perfect storm that would allow WWE create something truly special and ground breaking.

When I talk about something truly special and ground breaking, it is the Ultimate Evolution, which is allowing these two women to Headline and Main-Event Wrestlemania. I am not talking about having them be one of the Main-Events of the show, I am talking about them being the true and honest Main-Event of the Wrestlemania 34 and closing out the show.

There will be some who say that Ronda Rousey doesn’t deserve to be in that spotlight and it should go to others, but before it becomes the norm, someone needs to help open up the door for it to happen. You can list a bunch of the great womens wrestlers that are in the company between Sasha Banks, Bayley, Becky Lynch, Asuka and the list goes on, who could undoubtedly be in that position as the headlining act at a Wrestlemania, however, they don’t have the world-wide star power of a Ronda Rousey. When you put eye balls on a product, it opens up the door for the world to truly see what you are all about, which will create the Ultimate Evolution.

As mentioned, Charlotte Flair will defend the Smackdown Womens Championship against Ronda Rousey as the Main-Event of the show. Below that, you will feature the Undefeated Empress of Tomorrow and 2018 Royal Rumble Winner Asuka challenging Multi-Time RAW & Smackdown Womens Champion, Alexa Bliss for the RAW Womens Championship. Those two matches alone would be history makers as there has never been two singles Womens Championship matches on a Wrestlemania. The other match up on the show, would be the match up a lot of fans have wanted to see on the Wrestlemania Stage, featuring two women who have made history together their entire careers starting down in NXT, Bayley taking on Sasha Banks. You laid the ground work for this match at the Royal Rumble with Sasha Banks eliminating Bayley in the Royal Rumble and if you tell the story we all know they know how to tell and you give them twenty minutes on Wrestlemania, these two women have the chance to steal the show, which would only be setting the tone for what the Women of WWE can deliver on the biggest stage of them all. If you need to feature more women on the show, you can make a Multi-Womens Tag Match for the Kick-Off Show or you can add them as Lumberjacks to the RAW Womens Championship Match, with the story being, trying to keep Alexa Bliss from running away from Asuka.