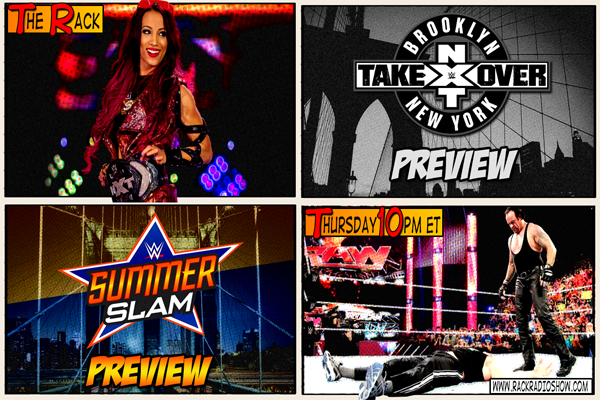 On this week’s edition of the Multi-Time Award Winning, The Rack returned with your hosts Lindsey Ward & Sir Rockin. On the program this week we gave you the latest news in both WWE & TNA brought to us by PWMania.com & TNASylum.net which included:

Its another edition The Rack Reacts: Tough Enough edition, as we talked about the ninth Edition of Tough Enough, including the final elimination before the Finals next week. We also gave our picks for who will win Tough Enough.

We previewed the Biggest Party of the Summer, Summerslam. We gave our thoughts on the entire card from top to bottom, including who we think will walk out of the big matches on the show including Brock Lesnar and The Undertaker, Seth Rollins vs John Cena, the Divas Three Team Elimination Match and more.

We also looked back at this week’s edition of WWE NXT on the WWE Network which featured the go home edition going in to NXT Takeover: Brooklyn, which included Bayley & Sasha Banks contract signing, a Samoa Joe & Baron Corbin Brawl, The Evil Sparkle Fairy Alexa Bliss goes slap happy and a final message by Kevin Owens and more. We also previewed the entire NXT Takeover:Brooklyn show, giving our takes who will walks out of the show victorious.