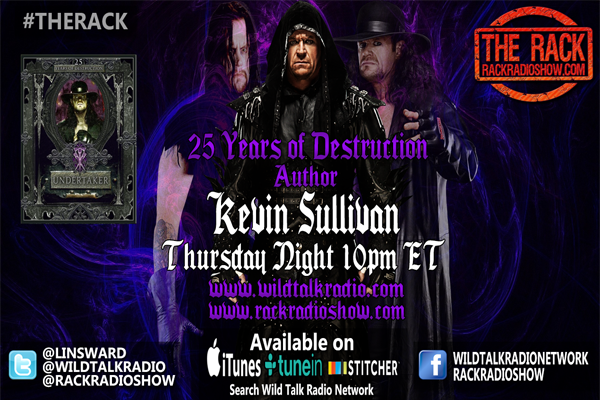 On this week’s edition of the Multi-Time Award Winning, The Rack returned with your hosts Lindsey Ward & Sir Rockin. On the program this week we gave you the latest news in both WWE & TNA brought to us by PWMania.com & TNASylum.net which includes:

We looked this week’s edition of WWE NXT on the WWE Network. This week’s NXT featured the Rhyno taking on Baron Corbin, Alexa Bliss & Asuka in action, along with the Debut of James Storm, yes JAMES STORM in WWE NXT and More!

We also talked WWE Hell in a Cell, as we previewed all of the matches on the show including both Hell in a Cell Matches featuring Brock Lesnar vs Undertaker & Bray Wyatt & Roman Reigns, the WWE Championship Match with Seth Rollins & Kane, the John Cena US Title Open Challenge & More.

If that wasn’t enough, we were joined by the Author of 25 Years of Destruction: Undertaker, Kevin Sullivan! We will talk to him all about his new book, his thoughts on Hell in a Cell, NXT, Tyler Breeze, Bray Wyatt & a lot more.